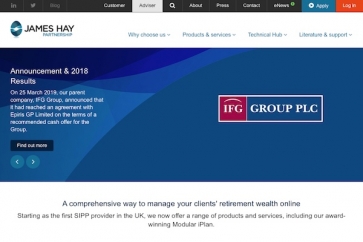 James Hay and Saunderson House both boosted assets in the first quarter on 2019, according to a trading update from parent company IFG.

The company now serves 59,000 customers, a modest increase on the same period last year and on 31 December 2018.

The update also revealed Saunderson House achieved 63 new client wins across both advisory and discretionary management services in the three months to 31 March 2019 and now serves 2,385 clients, up 7.7% from March 2018 and up 1.8% on 31 December 2018.

Kathryn Purves, CEO, said: “I am pleased to report that since publication of the Scheme Document on 9 April 2019, in relation to the proposed acquisition of IFG by Epiris, the Group has continued to trade in line with expectations and there is no change to outlook.”

She added: “The Group remains focused on resolving its legacy issues, however, at this stage there is no further update in relation to the Elysian Fuels matter in James Hay.”