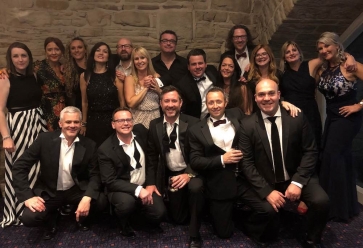 A charity ball organised by Financial Planning firm Belmayne has raised more than £8,000 for four local good causes in Derbyshire.

Dronfield-based Belmayne’s Foundation’s inaugural black-tie event was held at the Sheffield Hilton, with all money from ticket sales and activities on the night going to its adopted charities.

Hosted by the independent firm’s four partners, the dinner dance attracted more than 100 guests and raised a final total of £8,352.

Highlights included a raffle and auction, with the top lot – rugby tickets to watch England v Wales at Twickenham – selling for £600.

A case of rose champagne fetched £300, whilst the hammer came down on a bottle of Boris Johnson signed House of Commons wine at £85.

Belmayne partner, Ben Smalley, said: “We are absolutely thrilled that our first major fundraising event was such a success and was attended by so many local people.

My colleagues and I can’t thank those who came enough for their support, particularly the clients and friends who donated and bought our raffle and auction prizes.

“Without their generosity, we wouldn’t have achieved such an outstanding final total.”

The Belmayne Foundation was established by the Financial Planner to help small local charities.

All funds raised in 2019 will be split equally between four chosen charities.

They are: Sheffield Riding for the Disabled, The Welcome Club in Dronfield, the Third Holmesfield Scout Group and Neurocare.