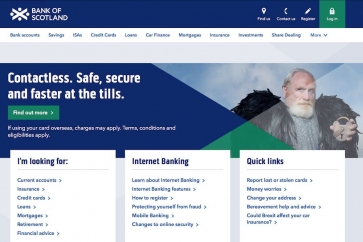 More than 400,000 Scots have fallen victim to a financial scam at some point in their lives, new research by Bank of Scotland and YouGov has revealed.

One in three people (29%) know someone who has been duped by a fraudster, according to the Bank of Scotland How Scotland Lives study.

Despite this, 84% said they feel confident that they would be able to spot a financial scam, and three quarters (78%) said they can keep up with the potential risks around financial scams.

A third (33%) of Scots reported that they had been targeted by fraudsters but were able to put a stop to it.

Despite sometimes being considered a more likely target for scammers, those aged over 55 were most confident that they could spot a potential fraudster (86%), while those under 24 were the least confident in their ability to spot an attempted scam (81%).

The research, commissioned to coincide with Citizens Advice Scotland’s Scams Awareness 2019, also found that dodgy phone calls (37%) and fake emails (36%) were the most common ways for fraudsters to target their victims.

However, scammers are broadening their horizons as Scots reported being contacted by fraudsters on social media (5%), company websites (4%) and through text messages (4%).

Paul Davis, fraud and financial crime director at Bank of Scotland, said: “Scots are confident in their ability to spot a fraudster, yet it is clear from our research that many people still get caught out when it comes to scams.

“Fraudsters have adapted to changing technology and are using ever more sophisticated tactics, making them more difficult to spot.

“We’re encouraging people to talk to friends and family about fraud, so that more people are aware of how to identify the tell-tale the signs of a scam.

“If you suspect you’ve been targeted, it’s important to contact your bank immediately.”

More in this category: « FSCS declares SIPPs firm in default as 400 customers hit Expanding IFA makes new hire in Dorset »
back to top