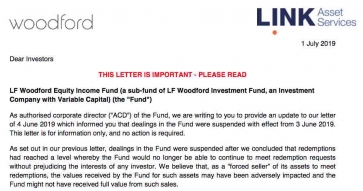 Woodford has extended the suspension of its LF Woodford Equity Income Fund (a sub-fund of LF Woodford Investment Fund) for at least another 28 days as the company grapples to avoid disaster.

The fund, which was suspended on 3 June after a wave of redemptions, will be suspended at least until the end of July.

The company announced the news late yesterday afternoon in a letter from Karl Midl, director of Link Fund Solutions Limited, the overseer for the fund (officially the authorised corporate director).

The fund is part of the Woodford stable of funds launched and managed by veteran fund manager Neil Woodford.

In a letter to investors Mr Midl wrote: “After consideration of all current circumstances relating to the Fund, we have, in conjunction with Northern Trust Global Services SE, UK Branch, the Fund’s Depositary, concluded that it remains in the best interests of  all investors  in  the  Fund  to  continue  the  suspension  of  the  issue,  cancellation,  sale  and  redemption  of shares in the Fund.

Mr Midl said that Link would continue to monitor the situation on a daily basis to consider whether the fund suspension should continue and will inform the FCA if the suspension needs to go on into August and beyond.

He added: “We understand that the suspension of dealings may be causing concern to you as an investor in the Fund. We can assure you that we are striving to do all we can to bring further clarity to the situation as soon as possible. All decisions  will  continue  to  be  taken  in  the  best  interests  of  investors.   We expect  to  be  in  a position to provide further information to investors on the next steps in relation to the Fund before the next 28 day review, being 29 July 2019.”

The FCA has ordered an investigation into the fund suspension which has largely been blamed on the use of illiquid investments and poor performance which have made rapid redemptions difficult.

A number of companies have said they will cancel Woodford mandates including Openwork and St James’s Place Capital. Hargreaves Lansdown, which has promoted the fund previously, has apologised to its customers.

Woodford is working to resolve the issues, including shifting money into more liquid investments to fund redemptions, but the future of the company remains in doubt.