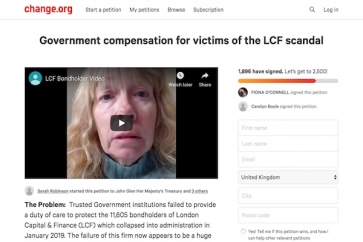 Investors hit by the collapse of £236m London Capital & Finance (LCF) earlier this year have launched a petition aimed at the Treasury, the FCA, Nicky Morgan MP and Antony Townsend the Complaints Commissioner.

The petitioners are seeking what they call “Government compensation” and affected investors revealed the “devastating” impact of the LCF mini-bond collapse.

One woman, Judith, 55, from Burnham-on-Sea, in Somerset, said: “I don’t know how to get through any more days.”

She said the failure of the firm had left her “desperate”.

Another signatory, Iain Wilson, said: “There has been a systemic failure by the Government's own regulatory bodies to protect the 11,600 investors from this.”

He added: “The human cost to these people has been devastating.”

The petition, which has been signed by more than 1,900 people at the last count today, was launched by Sarah Robinson who said she moderates “one of the LCF bondholder campaign and support groups, which now has over 1,500 members”.

The Change.org petition includes a description which reads: “Trusted Government institutions failed to provide a duty of care to protect the 11,605 bondholders of London Capital & Finance (LCF) which collapsed into administration in January 2019.”

It added: “The bondholders request the Government provide full compensation to the LCF bondholders, who are the victims of systemic regulatory failure, without delay.

“The bondholders request that HMRC apply tax on LCF ISA interest from the date HMRC declared the LCF ISA void rather than apply tax on interest retrospectively.”