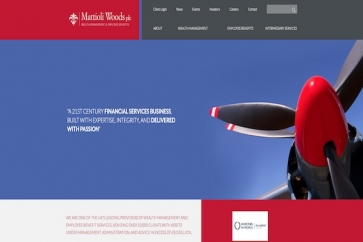 Mattioli Woods group managing director Murray Smith is to stand down, the firm has revealed today.

Mr Smith will relinquish his berth on the board at the company's next Annual General Meeting on 21 October 2019.

He will continue in a full-time role as founder director to the Group and his focus will be on his client portfolio, acquisitions and acting as an ambassador for Mattioli Woods.

Mattioli Woods said he was “instrumental to the success of the group and in this new role we will continue to benefit from his experience and insight”.

The period from now to the Annual General Meeting will be used “for a considered handover” of Mr Smith’s management responsibilities to the firm’s deputy group managing director, Michael Wright.

The announcement was made as the company published a trading update which showed assets had risen to £9.4bn at the year end.

• Growth in adjusted EBITDA and adjusted PBT versus prior year

• Gross discretionary assets under management of £2.6bn, with net inflows of over £250 million during the year

The firm has also hired James Wilson as chief compliance and risk officer and Ravi Tara to the new role of group finance director, reporting to the chief financial officer.

“His appointment will help us to build upon the strong compliance culture we already have in place.   “Following the further expansion of the group and its operations we have created the new role of group finance director, with responsibility for the oversight of the Group's financial systems and controls.

“Ravi's experience of improving operational delivery and cost efficiency in previous roles with Capita plc, Weetabix Food Company, JP Morgan, Barclays Capital and PwC, will add real value to our proposition as we position the Group for further growth.”

More in this category: « Pension changes could cause £260bn ‘accounting gap’ Fintech firm launches regulated digital IFA »
back to top