1 in 4 would consider a career as a financial adviser 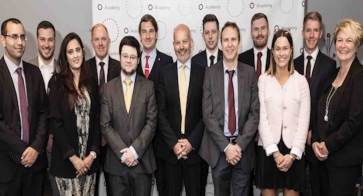 Some of the 2018 Openwork Academy intake and staff

New research suggests that one in four workers would consider a career as a financial adviser.

Openwork, which instigated the research, says that the findings suggest “growing interest in financial advice as a career.”

Some 17% of men say that they would ‘definitely consider’ becoming advisers and 18% say they would ‘consider’ it.

However, just 6% of women would definitely consider becoming advisers and 13% would consider it, suggesting it will be a while before the gender imbalance in financial advice is corrected.

Those most willing to consider a career change were in the 25 to 45 age group with around one in six (16%) in this segment saying they would definitely look at becoming financial advisers while 20% would consider it.

More said they would be willing to make the move into financial advice if there was support from providers with training – one in five (20%) would look at a career in financial advice depending on training support.

Openwork has expanded its Openwork Academy which helps career changers with experience in a broad range of sectors, including education, the armed forces, manufacturing and hospitality to become financial advisers.

It has accepted 54 trainees to the scheme so far this year – almost equalling the total intake for 2018.

Claire Limon, director of learning and acquisition at Openwork, said: “The growing interest in careers in financial advice is interesting and particularly at a time when demand for advice is increasing.

“It is particularly interesting that it’s people aged 25 to 45 who are most likely to consider changing career to the advice sector.”

Research for the study was conducted among 1,100 adults aged 18-plus online by independent researchers Consumer Intelligence in March.

Openwork Limited has over 3,900 financial advisers in the UK.

More in this category: « Schroders and JUST confirmed as CISI Gold Supporters Smith & Williamson boosts funds and profits in latest results »
back to top