Register for Financial Planning Today website for FREE to view more stories and get our daily newsletters. Click on 2 stories to see Registration pop up.
Tuesday, 16 July 2019 07:35 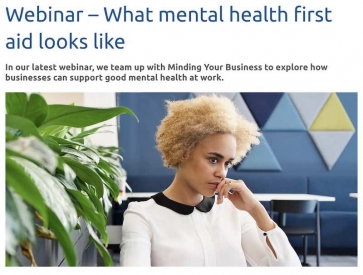 Unum has made mental health a priority

Employee benefits and income protection firm Unum has revealed that more people used its ‘return to work’ support for mental health issues in 2018 than any other condition.

Unum found that men made up 57% of all cases using its return to work support for mental health – with the biggest rise among men aged under 30.

Dr Syed Zakir Abbas, chief medical officer at Unum, said: “Decreasing stigma around mental health problems and better understanding of the benefits of early support could be contributing to more employees using our services – particularly younger men – which is a positive development.

“Having access to early intervention resources for employees suffering mental ill-health can be key to supporting recovery.”

The firm, which offers employee-related products and services such as income protection, life insurance, critical Illness and return to work support, found an increasing number of employees – 74% in 2018 rising from 70% in 2017 – have been able to return to work after receiving support from Unum’s support teams.

Poor mental health is estimated to costs the economy as much as £99 billion each year, says Unum, with as many as one in seven (15%) people at work having symptoms of an existing mental health condition. It believes supporting mental wellbeing of the workforce should be a “priority issue” for employers.

Peter O’Donnell, chief executive of Unum, said: “We believe employers have an important role to play in building healthy and inclusive work environments, where those with mental health concerns are fully supported. The emphasis Unum has placed on early intervention and identifying mental health issues in the workplace quickly is paying dividends, and our bespoke Mental Health Pathway is key to delivering this.”