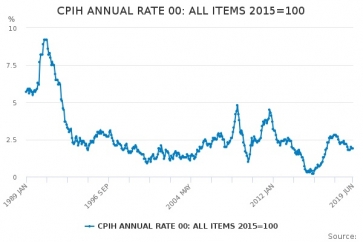 The Consumer Prices Index - including owner occupiers’ housing costs (CPIH) - 12-month inflation rate was 1.9% in June 2019, also unchanged from May 2019.

The largest offsetting upward pressures to change came from clothing and food.

The rate in June for RPI, an inflation measure no longer relied on by the ONS, was 2.9%, a slight decline from the 3% in May.

Reaction to the news has been mostly positive although some experts see trouble ahead.

Steven Cameron, pensions director at Aegon, said: “For the second month in a row, the inflation rate is spot on the Bank of England’s target of 2%. The figure follows labour market statistics which show wages have outpaced inflation for 16 months in a row and real wage growth rose at the fastest rate since October 2015 to 1.7% in May this year.

“Although the economy continues to be subdued, the low inflationary environment will be welcomed by households, particularly if wage growth continues to exceed price increases. This will be particularly welcome during the holiday period, although the continued weakness in sterling will offset this for those travelling abroad.

“If we continue to see prices rising slower than wages then consumers should be in a position where they can start to put any increase in disposable income into a savings pot.”
Ahmer Tirmizi, investment manager at 7IM, said: “Today’s UK CPI figures, which sees  inflation remain at the Bank of England’s 2% target for a second month in a row, presents a headache for the Monetary Policy Committee (MPC).

“The latest inflation data follows yesterday’s strong labour market data. Unemployment remains at its lowest rate since the 1970s while wage growth hit an 11 year high. The last time wage growth was trending up like this, rates were over 3%.

“The central bank has signalled it wants to get monetary policy back to normal. However, the bond market is expecting central banks across the world to cut rates and thinks the MPC should follow suit. Central banks don’t often fight the markets.

“Furthermore, the threat to the UK economy posed by a no-deal Brexit and Boris Johnson’s pledge to exit the EU with or without a deal is likely to play on the MPC’s mind. Indeed, as MPC member Gertjan Vlieghe signalled, if there was a no-deal Brexit then the central bank could even consider moving to cut interest rates again to a record low.”

“With interest rates unlikely to change anytime soon and inflation likely to remain at or near the BoE’s 2% target, investors will continue to struggle to find a real return from holding cash. Cash is not king over the long-term.”