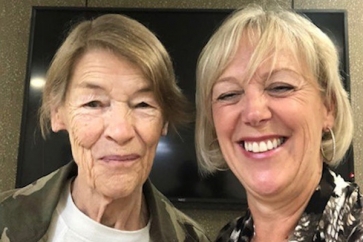 Ms Jackson, who is also a former Labour MP, was born in Birkenhead on the Wirral, where her father was a builder, and her mother worked in shops and as a cleaner.

She worked for two years in a branch of the Boots before taking up a scholarship in 1954 to study at the Royal Academy of Dramatic Art (RADA).

As a professional actress she spent four years as a member of the Royal Shakespeare Company from 1964. During her film career, she won two Academy Awards for Best Actress: for Women in Love (1970) and A Touch of Class (1973).

She also won the Tony Award for ‘Best Actress in a Play’ for her performance in a 2018 revival of Edward Albee’s Three Tall Women on Broadway.

This year she returned to Broadway to the role of King Lear.

She first became a Member of Parliament in 1992 and retired from politics in 2015.

For a blog post on the Magenta Financial Planning website Julie Lord spent some time speaking to Ms Jackson about money, money habits and money fears.

Speaking about growing up in the north west the actress said: “Money was very tight and I don’t think there were any big financial decisions made as we all lived day to day.

“We lived in a rented two up, two down, the fact that one of our aunts and my paternal grandmother and grandfather lived around the corner, I think was helpful.

“Not that they gave money but certainly that they could look after us on occasion and give us treats and the odd meal.

“Also in those days, the way my parent’s socio-economic group worked was that you were a member of a club and a certain amount every week was paid to the Clubman.

“This, in the main was for our clothes.

“I distinctly remember going to buy a new coat, when there was enough money in the club and ferocious arguments about what I wanted to wear and what my mother deemed to be acceptable.”

Asked who paid the bills, she said: “There were never any bills to pay as such because it was all about immediate exchange – I mean you just paid cash and got whatever it was you were buying there and then. Unless it was milk, where you would go to the Co-op with your milk tokens – I can still remember our Co-op number.

“There were no big transactions, there were major things that had to be met – that was the rent, the gas and the electricity, but if you didn’t have the money in your hand you simply didn’t have any gas or electricity.

“So it was always this immediate exchange of cash for whatever you were buying.”

Looking on the positive side, Ms Jackson said her most joyful financial experience was when she moved from being an occasionally employed actress to the Royal Shakespeare Company where she was “employed 52 weeks of the year and got paid for 52 weeks”.

She said her worst fear about money was “that a cheque will bounce”.

She added: “And I think that’s partly because I don’t have any natural overview of money – I still only spend what I’ve got in my wallet.

“One of the things that has changed over the years is that I now have one of those plastic cards, but even so, I try to use it as infrequently as possible.

“I do know what is in my bank account because my bank is efficient at sending me statements, but it doesn’t impact on me if I have enough to cover my immediate costs.

“If I think it is getting dangerously low, then I become totally neurotic.”

More in this category: « MPs demand FCA steps up fight against pension scams HSBC chief exec John Flint stands down after 18 months »
back to top