Register for Financial Planning Today website for FREE to view more stories and get our daily newsletters. Click on 2 stories to see Registration pop up.
Thursday, 15 August 2019 07:00 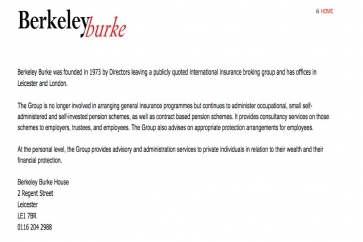 SIPP provider Berkeley Burke has been ordered to pay almost £1m in costs to people left out of pocket after making high-risk unregulated investments which were accepted into the firm’s SIPPs.

As a group, those hundreds of claimants embarked on court proceedings to recover their losses.

Now, after failing to comply with a Court Order and confirming that it would not take any further part in the litigation, Berkeley Burke’s defences in the group proceedings have been struck out and the claimants are permitted to enter judgement.

John Virgo, a financial services barrister at Guildhall Chambers in Bristol, represented the claimants throughout the proceedings and secured the Order, resulting in Berkeley Burke having to pay almost £1m as an interim payment on account of the claimants’ costs as well as the costs of the claimants’ application.

Laura Robinson, senior associate at Clarke Willmott Solicitors, said: “I can only speculate, but an advised defendant in court proceedings will almost certainly have appreciated what the consequences would be for openly and deliberately dis-engaging in the litigation, including the severe financial consequences that would result.

“One possible explanation, where a defendant chooses this course of action, is that it simply cannot fund the proceedings any further.

“I cannot know, but if that is Berkeley Burke’s situation, it’s possible that the firm may slip into insolvency in light of the £1m costs order it now faces.”

She added: “Were that to happen, it seems likely that the industry would pick up the bill and hundreds of those who lost out will be once more restricted to the compensation available from the Financial Services Compensation Scheme.”

Berkeley Burke was held accountable by the Financial Ombudsmen Service (FOS) for failing to act in accordance with the high-level principles expected of them.

FOS made its decision on the basis that it was fair and reasonable to expect authorised entities, like Berkeley Burke to:

• conduct business with due skill, care and diligence

• pay due regard to the interests of its customers

• treat them fairly (even in execution-only cases)

FOS argued that, in any event, the test of what was fair and reasonable went beyond the rules and guidance produced by the FCA.

By Judicial Review, Berkeley Burke challenged the lawfulness of the FOS decision, questioning whether the organisation was entitled to make the decision on the basis that it did.

The court agreed with FOS and Berkeley Burke appealed.

More in this category: « FSCS declares six financial firms in default LPAs ‘more important than ever’ claim experts »
back to top