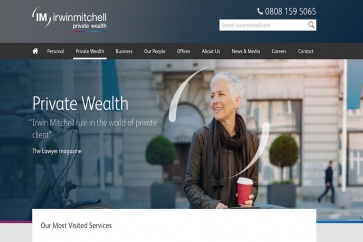 New statistics have shown a big increase in the number of elderly people living alone, prompting concerns from lawyers of an increase in elderly and vulnerable abuse cases.

The stats from the Office of National Statistics (ONS) revealed in its household and families report the number of people living alone in 2018 increased by 300,000 in a single year, driven by women aged 45-64 years and men aged 65-74 years.

The ONS argues as well as a rise in divorces and male life expectancy, the ageing population in the UK is responsible for the shift in household patterns – and without a rapid uptake in lasting powers of attorney applications this could cause serious issues, argue experts at national law firm Irwin Mitchell Private Wealth.

There have been a record amount of dementia diagnoses in the NHS, with figures from June showing over 450,000 people in the UK had been formally diagnosed with dementia – a 7% increase in three years.

The Alzheimer’s Society published a report in May predicting the number of people living on their own could rise to 240,000 people by 2039, painting what the firm called “a worrying picture for the future of the elderly and vulnerable”.

Kelly Greig, head of later life planning at Irwin Mitchell Private Wealth, said: “The ageing population in the UK is very much becoming a reality for us all, as the ONS stats reflect a big uptick in single households.

“There are still a lot of people who don’t even have a will in place, let alone lasting powers of attorney.

“Elderly people living alone can be very vulnerable to unscrupulous individuals that take advantage of their finances, unbeknownst to their friends and family until it’s too late.

“Pair these latest stats with the figures from the NHS on rising numbers of dementia diagnoses and we are potentially facing a big increase in the amount of financial abuse cases we see.”

As part of its recently published business plan, the Office of the Public Guardian (OPG) has launched a campaign to encourage the public to take out lasting powers of attorney, which exist in two forms: financial and health.

These allow a trusted individual, such as a family member or friend, to make decisions on the donor’s behalf should they lose capacity.

Ms Greig said: “We understand nobody likes to think about growing old and not being in control of their own lives.

“LPAs are easy to take out and can help to provide peace of mind that your loved ones – or, if you prefer, an independent third party – will be able to help you should the situation arise.

“Planning for later life is so important and so much more can be done with just a few simple plans in place.

“It is not just about the will anymore – ensuring protection during your lifetime is just as important.”