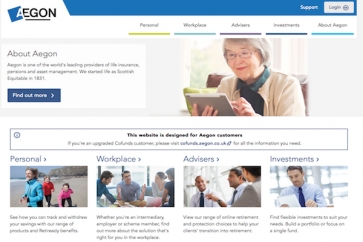 Aegon has reported a sharp rise in platform assets in the first half to £140bn as it completed its integration with acquisition Cofunds.

The company said that in combination with existing business, total assets administered on behalf of customers hit £173bn.

The UK business generated a profit of £61m and remitted £160m to the Netherlands-based Aegon group.

Adrian Grace, Aegon UK chief executive, said: “In the first half of the year we passed another milestone with platform assets rising from £128bn at the start of the year and passing the £140bn level for the first time. In addition to strong asset growth we generated a profit of £61m and remitted £160m to Aegon group - our highest ever dividend paid.”

The first half saw the completion of the migration of the former Cofunds book of business.

Also in the first half about £8bn of assets and 300,000 Nationwide customers who manage their investments via Aegon’s Investor Portfolio Service, migrated to new platform technology.

The firm said Aegon Retirement Choices, its original retail platform, continues to “trade well” even against a backdrop of “relatively weak investor sentiment and a slowdown in DB transfer volumes.”

Much-publicised technical issues on the Aegon platform were fixed, said the company, with operations restored “to target” in the second half of 2018.

There will be improvements to transaction history in the second half of the year and the firm promised advisers would see “the pace of enhancements increase over the coming months.”

Dependability of the platform will be a key aim in order to help advisers build their businesses.

Aegon’s workplace offering is growing following the BlackRock DC acquisition which “provides us with a proposition that is very attractive in the larger employer market.”

The Aegon individual protection business has been “digitised” which has led to new applications up 25% compared to the previous year.