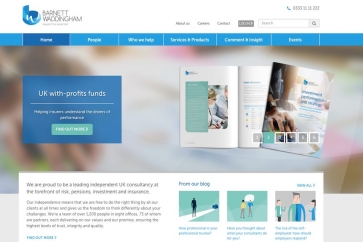 FTSE 350 DB pension scheme deficits have fallen by nearly a third and a growing number of firms approach the financial position required to buyout their liabilities, according to new research from Barnett Waddingham.

The deficit reduction has been driven by a combination of increased corporate bond yields and the continuing payment of deficit contributions, Barnett Waddingham says.

Companies in the energy and consumer staples sectors saw the largest falls in their total deficits, which fell by a combined £10bn.

As the total DB pension positions improve, an increasing number of companies have a DB pension scheme with an accounting surplus, raising the prospect of a buyout with an insurance company and removing the risk from their balance sheets.

Some 46% of FTSE 350 companies now have a pension scheme funding surplus on an accounting basis.

This has doubled from 23% just five years ago.

Nick Griggs, head of corporate consulting and partner at Barnett Waddingham, said: “With improving funding levels, maturing pension schemes and a significant amount of de-risking already achieved, company boards should be focusing on how they navigate the remaining part of the journey to the endgame.

“DB scheme liabilities have long weighed on company balance sheets and, despite the measures taken to limit their cost, they remain a far greater drain on resources than their DC counterparts.

He added: “Now is the time to take action and set a new approach.

“As a growing number of companies can see the light at the end of the DB pension scheme tunnel, it is vital they proactively put in place a strategy targeted at reaching the scheme’s endgame.

“Many could soon be in a position to write the cheque which will make the aspiration of an insurance buyout a reality.”