Register for Financial Planning Today website to get our daily newsletters. Click on 2 stories to see the Registration pop up.
Tuesday, 10 September 2019 07:00 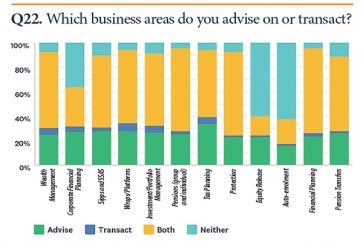 The responses from readers taking part in the latest Financial Planning Today survey demonstrated the wide variety of business areas that Financial Planners advise on and transact.

This is an edited section of the feature which can be read in full and for free here.

Some 91% transacted and advised on SIPPs and SSAS. Investment/portfolio management (91%) and pension transfers (88%) were also strongly represented.

However, some planners were unhappy with provider service in some areas.

One area of unrest appears to be in the service from platforms with more than one in five planners looking to change provider.

Some 6.7% of planners considered service levels to be “very poor” and said they were “actively seeking a new platform.”

The vast majority (65%) said platforms could do better.

Just 13% said the service they received was “excellent.”

Surprisingly, one area where planners appear to be taking a potential hurdle in their stride was regulation.

Despite the FCA’s recently announced major review of financial advice many viewed the review as positive.

Close to 70% said it was the right thing to do with 30% harbouring reservations.

This was despite more than 54% of respondents stating that financial regulation costs, including the FSCS and Financial Ombudsman, were a key challenge.

The main issue for many was the rising cost of professional indemnity insurance (58%).

The survey also showed the wide variation in the size of firms.

Many are still small with just one or two staff but there is growth among bigger firms, likely driven by a recent wave of mergers and acquisitions.

Marginally the second most popular answer (after one or two employees on 18%) was six to 10 employees at 17% of respondents, but this was closely followed by larger firms of more than 100 employees on 14.5%, tied with firms employing 11 to 25 staff.

The vast majority expressed satisfaction with professional bodies like the PFS and CISI.

The full feature and survey results can be read for free here.