Register for Financial Planning Today website for FREE to view more stories and get our daily newsletters. Click on 2 stories to see Registration pop up.
Monday, 16 September 2019 07:00 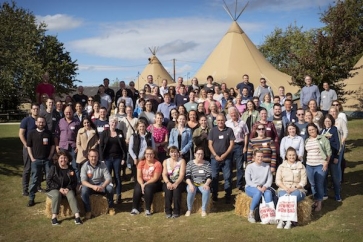 Organisers have spoken of a “great” Paraplanners Powwow last week.

The event, now in its seventh year, was another sell-out as Paraplanners gathered from far and wide in rural surroundings in Aynho, Northants.

Under teepees they talking all things Paraplanning and took part in ‘campfire sessions’ on a range of subjects including a tax masterclass, centralised retirement propositions and Paraplanner productivity tips.

He said lunch was held outside in the sunshine with fajitas, BBQ & ice cream.

“As with all previous years, this is where Paraplanners make the most to meet up with friends old and new to share good ideas,” he added.

Mark Polson of The Langcat gave a talk on current issues and ended with “wise words for Paraplanners” on “doing the right thing and mental wellbeing”.

Mr Allum said: “The day ended with the Powwow itself where topics voted on by Paraplanners were discussed.

“A great day was had by all that just would not be possible without the supporters who help us make it happen and all the gurus, hosts and Paraplanners who volunteer.”

New host Rebecca Tuck, of Magenta Financial Planning, added: “I was thrilled to be asked to host this year’s Powwow and, after some early morning nerves, had an absolutely fantastic time.

“It was great to learn more about what goes on behind the scenes and all of the effort involved in putting on such a brilliant day.

“As a participant as well as host, the content was excellent and I’ve taken a lot of top tips away, but I’m hugely grateful to have also had the opportunity to help facilitate and hopefully contribute to everyone’s Powwow experience.”