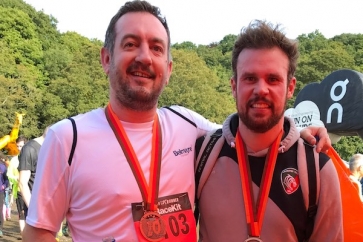 The pair added a further £300 to the Belmayne Foundation’s fundraising total, by joining the thousands of competitors braving the inclement weather to complete the extremely muddy course.

He said: “It is three years since I last ran regularly and it has been a real challenge to kickstart my fitness regime and build up my stamina for this race.

“Raising money for our fantastic four charities gave me the push I needed to keep going through the training and the run itself and I am very proud to have finished in a respectable time.

“In fact, I have already signed up for next year’s Dronfield 10k to keep the momentum going.”

The Belmayne Foundation was established by the independent firm’s four partners to give back to the community in which they are based.

So far, more than £10,000 has been raised for this year’s charities, which are Sheffield Riding for the disabled, The Welcome Club in Dronfield, the Third Holmesfield Scout Group and Neurocare.

The fundraising baton is now being passed to fellow partner, Ben Smalley, who will be undertaking a 100-mile bike ride at the end of this month.