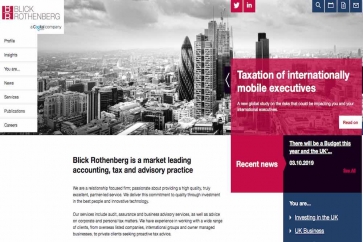 Blick Rothenberg, which alongside its accounting and tax services has a pensions planning and advisory arm, has warned a Labour government would lead to “dramatic changes” in taxation.

The parties tax policies, mainly driven by the Shadow Chancellor John McDonnell, represent the most monumental shift away from the current tax regime in a generation, the firm says.

Nimesh Shah, a partner at the firm, listed and outlined some of the policies a Labour government could unveil.

“It would be hoped/expected that the 50% rate would be aligned to the point the personal allowance has been reduced to zero, so that a 75% effective tax rate does not apply.

“One should contrast Labour’s proposal against Boris Johnson’s desire to raise the basic rate threshold from £50,000 to £80,000 – the two suggestions could not be further apart.”

• Mr Shah said that Labour would increase the present rates of CGT by 8%, meaning the higher rate would be 28%.  Also, there is a possibility that Labour could align CGT rates to income tax rates, removing any such differential.

“There has also been speculation around whether the 10% rate of Entrepreneurs’ Relief will remain.

“Whilst Labour have previously commented that Entrepreneurs’ Relief encourages and supports small businesses, there could be changes to the lifetime limit (currently £10 million) and increasing the rate, possibly to 20%,” he said.

He added: “I would urge caution against any major reform, as Entrepreneurs’ Relief is a cornerstone of the UK’s entrepreneur regime, and if anything, there are strong grounds to increase the lifetime limit.”

• Mr Shah says Labour have plans to abolish the Inheritance Tax nil rate band and replace with a gift allowance (during lifetime and on death).

Gifts in excess of the allowance would be subject to a gift tax (possibly aligned to income tax).

The suggestion is that the lifetime allowance would be as a little as £125,000.

He added: “Inheritance Tax is in need of major reform, and the Treasury and Office of Tax Simplification have made various proposals in recent years.

“The present regime is certainly not fit for purpose and needs to modernised and simplified.

“The introduction of a lifetime gift tax would be appealing for any Government, as it effectively accelerates the point at which the tax is collected.

“At the moment, inheritance tax accounts for very little in overall tax take, although there has been a notable increase over the last 12-18 months.”

• An introduction of a wealth tax, possibly only applying to properties worth more than £2m – again, John McDonnell spoke about a reform of property taxation and a redistribution of land.

This has been talked about for many years, and not uncommon in many European countries, Mr Shah says.

“The introduction of a new tax (the rules, collection mechanism, etc.) is incredibly complex – with a wealth tax, this needs to be very carefully thought through, especially with an ageing ‘asset rich/cash poor’ population and there are likely to be concerns around how people will have the cash liquidity to pay such a tax.

“The introduction of a wealth tax on property could result in a property ‘fire sale’, which could have very damaging short/medium term effects for the UK property market, at a time when it is incredibly fragile,” he said.

• Mr Shah said that the most recent announcement was that a Labour Government would abolish the ‘non-dom’ status.

He said: “It is not the first time that Labour has suggested abolishing the status, and at the time of the 2015 election, Ed Miliband suggested the same – this of course prompted David Cameron and George Osbourne to review the then non-dom regime which resulted in the 15 year cap on using the status.

The UK’s non-dom regime is envied by other countries and in fact, some European countries (such as Portugal and Italy) and have introduced their own versions in recent years.

Changes to the non-dom regime need to be carefully considered, as it is a major attraction for international talent to the UK across a number of sectors.

Mr Shah said: “Labour have indicated that they will increase corporate taxes to 26%, but re-introduce the small companies’ corporation tax rate, set at 21%.

“This would seem to be a major step back, as the UK is widely regarded as a centre for promoting business and entrepreneurship and attracting international businesses to the UK.

“The international angle should not be underestimated, and a competitive corporate tax rate is fundamental.”