Register for Financial Planning Today website for FREE to view more stories and get our daily newsletters. Click on 2 stories to see Registration pop up.
Wednesday, 16 October 2019 16:31 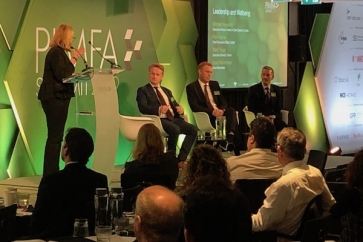 Mr Feeney revealed his battle with mental health issues at the PIMFA Summit, in London, today.

He was taking part in a panel discussion on ‘Leadership and Wellbeing’ and received a warm round of applause after he shared his own struggles.

He told delegates: “I grew up with a very loving mother and to an extent a very loving father, but a father with very serious mental health issues.”

Mr Feeney said his father’s issues stemmed from a history of domestic violence, which were carried across the generation into his own family.

“One of my earliest memories is my mother crying with the kitchen all broken up,” he said.

“One of the things I said to myself was ‘that will never be me’. I’m proud to say that it’s not me.”

He said he was diagnosed with post-traumatic stress disorder and “lived for a decade with flashbacks”, as a result of what he witnessed as a child.

He also said he had to deal with feelings of “huge embarrassment.”

“I grew up with a sense of shame and guilt that I wasn’t able to protect my mother more or my siblings.”

Mr Feeney revealed how he sought help for trauma at two centres in Arizona, US and began what he called his “journey” towards dealing with his issues.

Speaking about how he views mental health and wellbeing issues in the business world, he said: “I believe it’s the biggest taboo in the city, there’s a big undercurrent, whether it’s addiction, substance abuse or eating disorders.”

He said he had actively instilled a culture of openness around mental health issues at Quilter and described it as “the biggest cultural transformation” for the company.

He said the approach had helped the firm to be more resilient and able to rise to challenges.

“I think supportive teams are more competitive teams,” he said.

The summit also featured experts discussing other topics including SM&CR and ESG investing and will be closed by TV naturalist Chris Packham and PIMFA chairman Lord Deben.

More in this category: « Boosst: ‘How we fought back against clone scammers’ Tatton acquires Tenet subsidiary in £2.7m deal »
back to top