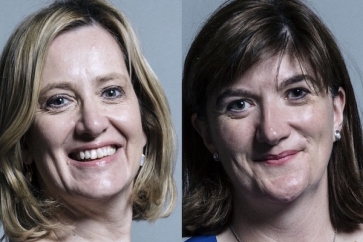 Former Work and Pensions Secretary Amber Rudd and Nicky Morgan, who recently chaired the House of Commons Treasury Select Committee, are to stand down and not contest their seats in the upcoming General Election.

Ms Morgan, who headed up the Treasury until July this year, announced the news on Twitter.

The Loughborough Parliamentarian said her intentions were partly motivated by “the clear impact on my family and the other sacrifices involved in, and the abuse for, doing the job of a modern MP”.

She tweeted: “For the first time in 18 years I won't be a candidate in the next General Election.

“I've loved being ‪#Loughborough‬'s voice in Westminster since 2010 & being DCMS Secretary - & I look forward to supporting the PM, Government, Conservative Party and my successor in the future.”

Former DWP supremo Ms Rudd, quit Boris Johnson’s Government over objections to 21 former Tories being stripped of the whip for voting against the Government over Brexit, announced her decision not to seek reelection as the Government whips office refused to let her back into the Conservative Party.

More than 50 MPs have so far revealed they will not seek reelection in the forthcoming poll.