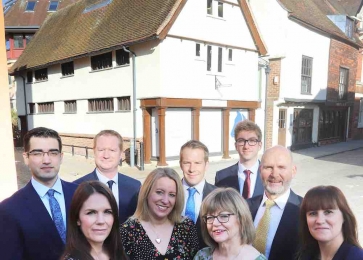 The new office, Merchant House, in the town’s Silent Street, is a 16th century timber-framed medieval merchant’s house which was once taken down and moved to a new location.

It was was originally situated elsewhere in the town but a number of years ago the Ipswich Building Preservation Trust (IBPT) dismantled and stored it until contractor Jackson Projects, who were building a new office block on Silent Street, undertook the task of repairing, restoring and re-erecting the building in Silent Street.

Nicholas Jacob, chairman of the Ipswich Building Preservation Trust, opened the new building for SG in a ‘ribbon-cutting’ ceremony recently.

Mr Jacob said “We are delighted therefore to see that the building will continue to be put to good use as the new offices for SG Wealth Management.”

Stephen Girling, SGWM’s managing director, said: “We are very pleased to have completed the move to our new Ipswich office. It is an exciting challenge to adapt such an old building to accommodate a 21st century business, but behind the beams we now have superfast broadband and 21st century technology whilst keeping the building’s charm and still offering a good ‘old fashioned’ client service.”

SG Wealth Management was founded in 2001 and provides Financial Planning and investment advice to individual and corporate clients throughout East Anglia. SGWM employ 37 staff in Ipswich and Norwich.