Transfer values plunge in October but activity up 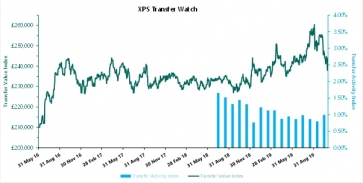 Defined benefit pension transfer values fell by 4% in October - one of the biggest declines seen in several years.

The decline reverses significant rises over the summer, according to XPS’s Transfer Watch survey which charts changes in transfer activity and numbers of transfers.

While transfer values fell, the number of members transferring pensions from a DB scheme to another arrangement during the month increased to nearly 1% of all XPS managed pension holders.

XPS Pensions Group’s Transfer Value Index shows the estimated Cash Transfer Value of a 64-year-old member with a pension of £10,000 a year with typical inflation increases.

The company says the change in the index was driven by increases in gilt yields and a fall in expected inflation over the month.

The Transfer Activity Index recorded an increase in the number of transfers completed in October, to an annual equivalent of 0.99% of eligible members, up from 0.8% in September. The company says that this is the highest rate seen since March. 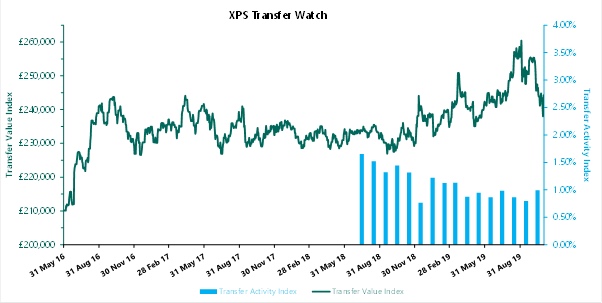 Mark Barlow, partner at XPS Pensions Group, said: “October was another turbulent month for the financial markets. The rise in gilt yields has resulted in the largest fall in our Transfer Value Index since its inception, with transfer values 4% down on the previous month end.

“However, transfer activity has increased substantially which is possibly a reaction to the record high transfer values seen over the summer months.”

More in this category: « Jupiter poaches Schroders director to be new chair Get 12 month Digital Magazine and web access for just £10 »
back to top