Register for Financial Planning Today website for FREE to view more stories and get our daily newsletters. Click on 2 stories to see Registration pop up.
Monday, 25 November 2019 09:29 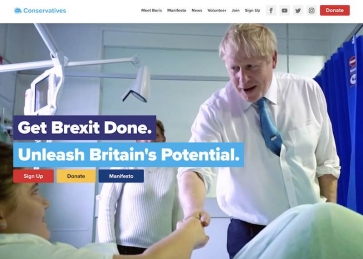 Industry reaction to the Conservative Party’s manifesto - published on Sunday - has been muted with few expecting radical change for pensions.

The Conservative Party has opted for a policy of steady pensions evolution with the firmest pledge being to keep the state pensions triple lock - criticised by some industry experts as increasingly unaffordable.

The triple lock, which increases the state pension by inflation, wage growth or 2.5% per annum - whichever is highest - is now supported by both the Conservative and Labour parties.

Rachael Griffin, tax and Financial Planning expert at Quilter, said the Conservatives had gone a stage further and extended the triple lock pledge to tax and VAT - a move that could prove popular with voters.

She said: “As a clear play to the voters the Conservatives have promised a “triple tax lock” which says they will not increase tax rates for five years on income tax, national insurance and VAT.

She claimed the Conservatives had “dodged” major reform of Inheritance Tax.

Her colleague Jon Greer, head of retirement policy at Quilter, said that while the NHS had recently promised to sort out the pension tax overtime dilemma for senior clinicians there was more to do on the pension taper tax issue.

He said: “The ‘taper problem’ as the Conservative manifesto calls it, was introduced by the Conservative Government, albeit by George Osborne.  The ill-conceived policy has had a disastrous impact on the NHS and has the capacity to bring several public services to a grinding halt.

“Many doctors, and other public sector workers, have faced tax penalties for breaching the annual allowance because of the way their pensions are accrued.

“Despite this, Boris Johnson’s Tory party appear to refuse to accept that the taper is not fit for purpose and should be scrapped, instead choosing to look for short term bespoke fixes for the NHS. The manifesto pledge sounds the same, as the Tories commit to work with medical bodies to find a fix. A far simpler response would be to scrap the taper altogether, although this maybe something the Treasury is reticent to do.”

One area of tax reform and pensions for which there was broad support was ending the ‘pensions net pay’ issue which hits lower paid workers saving into a pension.

The manifesto says the Conservatives will end a tax flaw that means that the lowest earning workers, mostly women, miss out on £8,000 in pension savings over the course of their working life.

Former pensions minister and Royal London director of policy Steve Webb, Royal London, said: “The issue around low paid workers has been raised by campaigners for several years, with a recent Royal London FOI reply suggesting that around 1.7 million workers are missing out.   Until recently the Government has said that it could not find a cost-effective solution.

“On higher paid workers, the government announced last week that it would respond to the ‘taper tax’ issue affecting doctors by covering their annual allowance tax charges for 2019/20.  However, a letter from the Health Secretary has said that this could amount to ‘tax planning’ and ‘tax avoidance’, so it is unclear where doctors would stand if they take advantage of this offer.  The proposals do not cover other workers affected by the tapered annual allowance.”

He added: “It is welcome that the Conservative manifesto refers to two of the various anomalies in the pension tax relief system.  On low-paid workers, the manifesto represents a welcome shift in position after the government has refused to act for several years.  But on the tapered annual allowance, the measure proposed is far too narrow and may not even work.”

Steven Cameron, pensions director at Aegon, said “resistance” to the claims by the WASPI pension campaigners, who want older women to be reimbursed for ‘lost’ pension, was a marked difference to Labour although many policies were similar.

He said: “The biggest difference, and it’s a massive £58 billion difference, relates to the WASPI women who found their state pension age increase from 60 to 66 without clear, personalised advance notice. The Tories are not matching Labour’s commitment to compensate them.”

The pensions industry body, the Pensions and Lifetime Savings Association (PLSA), said there some positives in the manifesto but also some missed opportunities.

Nigel Peaple, director of policy and research at the PLSA, said: “The Pensions and Lifetime Savings Association (PLSA) strongly supports the Conservative Party’s manifesto commitment to conduct a review into the discrepancies between net pay arrangements and tax relief at source for pensions.

“The discrepancy means automatic enrolment contributions for savers who earn between £10,000 and £12,500 are more expensive for those on net pay arrangements. It is our view that this can be fixed by adjusting the data gathering system used by HMRC.

“We are also pleased the Conservatives have pledged to reintroduce the Pension Schemes Bill which includes important measures to discourage reckless behaviour by a small minority of scheme sponsors, as well as a provision for the creation of a consumer-focused pensions dashboard.

“We are disappointed the manifesto does not include any commitments to extend the scope of pension automatic enrolment to include younger workers, or lower paid workers with multiple jobs, and the self-employed. The manifesto also fails to commit to raising the minimum contribution levels for automatic enrolment from the current level of 8%.”