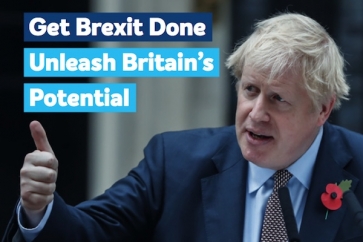 The Conservative Party launched its manifesto yesterday in the marginal seat of Telford with the 64-page document including a number of pensions pledges.

The document began with a 'guarantee' by way of a series of pledges from Prime Minister Boris Johnson, including extra funding for the NHS, more police officers and a vow not to raise Income Tax, National Insurance or VAT.

The manifesto, entitled ‘Get Brexit Done: Unleashing Britain’s Potential’, also promised a solution to the problem of NHS overtime.

On NHS pensions it said to Conservative government would “want to make sure that doctors spend as much time as possible treating patients, so we will address the ‘taper problem’ in doctors’ pensions, which causes many to turn down extra shifts for fear of high tax bills”.

It added: “Within our first 30 days, we will hold an urgent review, working with the British Medical Association and Academy of Medical Royal Colleges to solve the problem.”

On the State Pension and earnings it read: “We have focused, over the past decade, on making sure that work always pays – particularly for those most in need of support.

“We have raised the minimum wage significantly and introduced and consistently raised the National Living Wage.

“We have doubled the personal allowance to £12,500, so that everyone gets to earn a decent amount before they are taxed.

“And we have made sure the State Pension keeps pace with earnings.

Furthermore, the prospectus promised to protect the pensions ‘triple lock’.

It read: “We will keep the triple lock, the winter fuel payment, the older person’s bus pass and other pensioner benefits, ensuring that older people have the security and dignity they deserve.

“We recognise the value of free TV licences for over-75s and believe they should be funded by the BBC.

“A number of workers, disproportionately women, who earn between £10,000 and £12,500 have been missing out on pension benefits because of a loophole affecting people with net pay pension schemes.

“We will conduct a comprehensive review to look at how to fix this issue.”

On workplace pensions the Tories have pledged to “reintroduce legislation that protects pension pots from being plundered by reckless bosses, helps savers be better informed with pension dashboards, and creates a new style of pension scheme which is more sustainable for workers and employers”.

The document also says an incoming Conservative administration would “unlock long-term capital in pension funds to invest in and commercialise our scientific discoveries, creating a vibrant science-based economy post-Brexit”.

A Boris Johnson-led government would also look to creating a long-term solution to the social care conundrum, the manifesto states.

“We will build a cross-party consensus to bring forward an answer that solves the problem, commands the widest possible support, and stands the test of time.

“That consensus will consider a range of options but one condition we do make is that nobody needing care should be forced to sell their home to pay for it,” the manifesto promised.