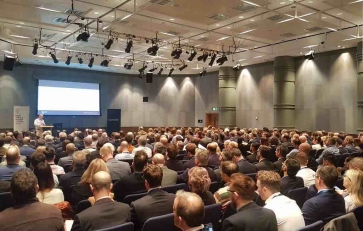 PFS chief executive Keith Richards has said feedback on the PFS 'Futureproof' Financial Planning Conference - held in Birmingham yesterday (Thurs 28 November) has been "absolutely fantastic" and he was delighted with the turnout as nearly 2,000 finance professionals took part.

Speaking exclusively to Financial Planning Today, Mr Richards said the large turnout for the one day event, which ended with the PFS Awards, was testament to the strong growth in the organisation's membership over the past few years.

He said: "For me the most obvious success of this year's event is the feedback we've received throughout the day from members which has been absolutely fantastic. People have appreciated the quality of the speakers and the focus on Financial Planning and the future.

"Some of the break-out sessions have often been standing-room only and we had over 500 in one break out session alone."

Mr Richards said more than 2,000 finance professionals had registered to attend the Futureproof event and some break-out sessions had been packed with more than 500 at some and standing-room only at times. The event was moved from London to Birmingham and made one-day to give more members a chance to attend and this had paid off, he said.

Mr Richards revealed that the growth in PFS membership to over 40,000 - a figure announced at the conference - is in stark contrast to internal predictions some years ago of a sharp decline in PFS membership post-RDR.

Seven years ago, at the time of RDR - the Retail Distribution Review which effectively banned commission-based investment sales among other changes - PFS membership was around 23,000 and was forecast to decline to 16,000 to 18,000 as advisers retired early or left the sector. Instead membership has now risen to 40,000 and is continuing to grow, albeit at a slower pace than the first few years post-RDR, he said.

More advisers stayed in the sector than predicted and there has been strong growth in new, younger planners and more women have joined. At a recent PFS graduation ceremony 30% of the graduates were women.

Mr Richards said the organisation had now issued 24,000 Statements of Professional Standing (SPSs) - the approval required by financial advisers to work. Regional events were also increasingly well supported, he said, with 4,500 people attending regional events over the past year and some regional events now as big as the annual conference was a few years ago.

This year's annual conference event was themed 'Futureproof' and was designed to give delegates the ability to prepare their firms and themselves for rapid future change.

• Financial Planning Today has produced a number of stories from the event which you can find on this site and also on our Twitter account on @_FPToday. Also see the PFS Twitter hashtag #PFSFutureProof for continuing coverage.

More in this category: « FCA to ban marketing of controversial mini-bonds Nucleus adds trading enhancements in platform boost »
back to top