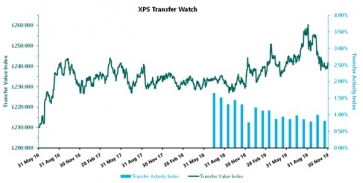 The number of Defined Benefit transfers fell in November as transfer values slipped, according to the latest XPS Transfer Watch.

The movement was driven by increases in gilt yields over the month however the relatively stable financial markets in November translated into the lowest volatility in the index since July 2018, said XPS.

The company believes volatilty could be seen over the next few months due to political uncertainty and the potential impact of the Chancellor’s recent announcement of potential eventual alignment between the Retail Prices Index (RPI) and the Consumer Prices Index incorporating housing costs (CPIH).

XPS said: “This could have an impact on transfer values for those members with benefits linked to RPI which may see their values reduce. The change is proposed to happen sometime between 2025 and 2030 and there will be a consultation early next year on the precise timing.”

Mark Barlow, partner at XPS Pensions Group, said: “It’s perhaps surprising, given the General Election, that November represented the most stable month for our Transfer Value Index in over a year.

“We will wait to see whether that continues after voters go to the polls on 12 December. Transfer activity also fell over November, perhaps impacted by the political uncertainty but the rates remained broadly in line with those observed recently.

“Market reaction to the proposed changes to RPI has been subdued so far, perhaps reflecting the uncertainty over the timing of any changes. This means that transfer values have been largely unaffected so far.

“However, trustees and sponsors should now consider whether transfer values paid from their pension schemes are providing fair value to members in light of this announcement.”