Register for Financial Planning Today website for FREE to view more stories and get our daily newsletters. Click on 2 stories to see Registration pop up.
Tuesday, 24 December 2019 08:46

A Japanese fund - Legg Mason Japan Equity - has topped the best performing funds over the past decade but the best performers were a mixed bag with no single sector dominating.

The Legg Mason fund provided a return of nearly 700% for investors over the past 10 years, however this fund was one of the worst performers in the previous decade.

Platform and SIPP provider AJ Bell has analysed the performance of the best and worst performing funds and investment trusts over the past decade as we prepare to leave enter the 2020s.

The funds are mixed but AJ Bell says that if there is one better performing sector it is Japanese Smaller Companies, the “stand out” over the decade. 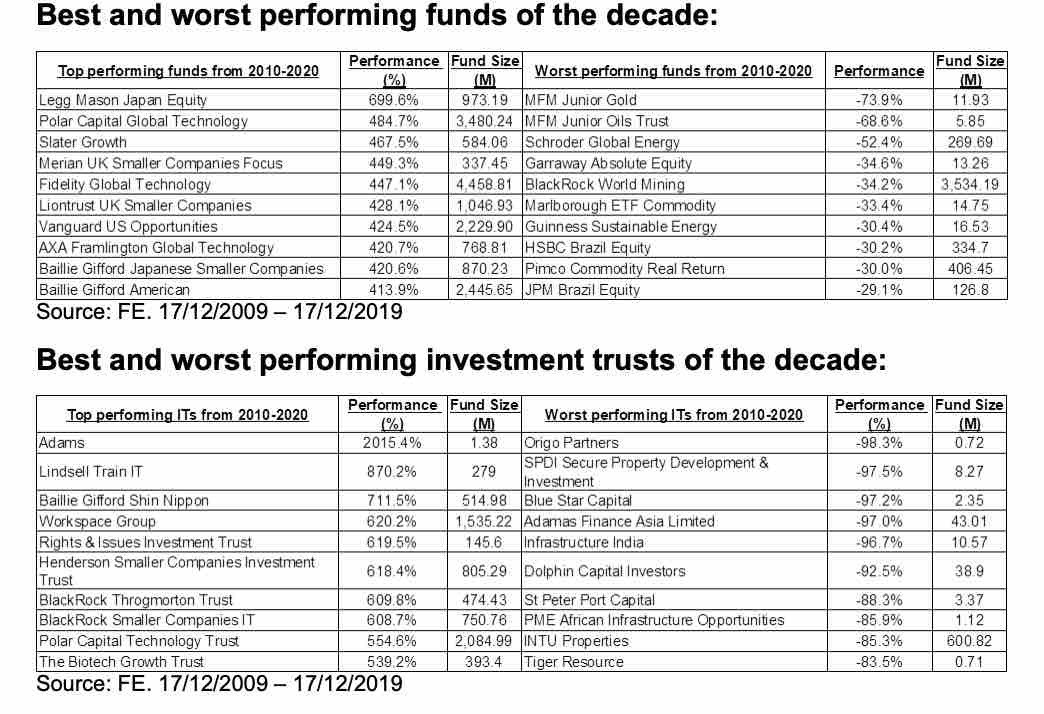 Ryan Hughes, head of active portfolios at AJ Bell, said: “Looking at mainstream investments, Japanese smaller companies have been the stand out area over the decade with the Legg Mason Japan Equity fund, managed by Hideo Shiozumi, leading the tables, growing by nearly 700% over the last ten years.

“Interestingly, a look back at the previous decade shows us that this very same fund was the second worst performer of that decade showing just how things have changed as quantitative easing has driven markets higher.

“The other clear theme of the decade is UK smaller companies with Slater, Merian and Liontrust all showing their stock picking prowess over a long period.”

The worst performing fund was MFM Junior Gold which which lost investors nearly 74% of their money.

Mr Hughes said: “After being the top performer of the previous decade, commodities have certainly struggled over the last ten years with gold, oil and other commodity funds all taking a pounding. The reliance of commodities on the Brazilian market also meant that country specific funds made the list of shame with HSBC and Pictet both seeing their Brazil funds at the bottom of the charts.

“Away from commodities, the Garraway Absolute Return fund delivered anything but this, with a fall of nearly 35% making it a miserable decade for long term investors.”

“Unsurprisingly, the themes seen in open ended funds have been replicated in investment trusts with Japanese smaller companies, UK smaller companies and technology all performing strongly. Honourable mentions should go to the likes of Baillie Gifford, Henderson and BlackRock amongst others for delivering huge returns for investors.”

Looking at the worst performing investment trusts he said: “While no obvious theme persists, the appearance of the India Infrastructure Trust and African Infrastructure Opportunities showing huge losses shows just how hard it can be to make money in high risk markets such as these.”

More in this category: « People are happiest between ages 65 and 74 - ONS TPR authorises the first new master trust   »
back to top