Consultation on future of RPI to begin on 11 March 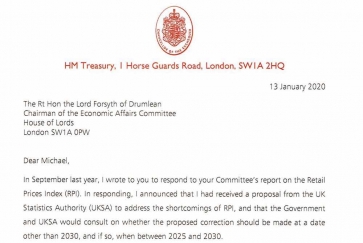 Chancellor Sajid Javid has confirmed that consultation on the future of the Retail Prices Index - used to set many annual pension scheme increases - will begin when he presents his Budget on 11 March.

The move could herald the end of RPI or a merger between the CPI and RPI inflation measures. RPI is often a higher figure than CPI meaning some pension savers could lose out.

However, RPI is now considered a dated measure and CPI is the most used measure of inflation by Government and other bodies.

The Chancellor has written to Lord Forsyth, the chair of the House of Lords Economic Affairs Committee, this week announcing that the joint consultation between the Government and UK Statistics Authority (UKSA) on a “proposed change to address the shortcomings in the Retail Prices Index (RPI)” will now launch at Budget 2020.

The consultation will be open for responses for a period of six weeks, closing on 22 April. The Government and UKSA will then respond to the consultation before the Parliamentary summer recess.

In his letter today, Mr Javid wrote that the Government and the UKSA would consult “on whether the proposed correction should be made at a date other than 2030, and if so, when between 2025 and 2030.”

However, he left the door open to eventually ending the RPI measure and replacing it with the more modern CPI - or merging the two.

The UK Statistics Authority has put forward two proposals: one to cease publishing the RPI and the second to align RPI with the Consumer Prices Index including housing costs (CPIH).

Any changes would likely require primary legislation and the Chancellor has said any quick change could be “highly disruptive” to the economy and public finances at present so a medium to long term approach to any changes is more likely.