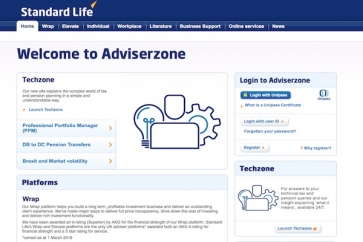 Three quarters of financial advisers (71%) polled in a recent survey say they want ‘a framework’ for Pensions Dashboards to be prioritised by the government in 2020.

The Government giving priority to Pensions Dashboards was the most popular recommendation from advisers.

Some two fifths of financial advisers say they want to see further enhancements to auto enrolment as a major priority for this year,  according to new research from Standard Life.

Standard Life’s quarterly survey of financial advisers found that the vast majority viewed Pensions Dashboards as the most important element of the government’s Pensions Bill, which was introduced to the House of Lords earlier this month and had its second reading this week.

Although not included in the Bill, further enhancements to auto enrolment was the next biggest priority raised, cited by two fifths (42%) of respondents, said Standard Life.

Greater powers over trustees for the Pensions Regulator and the development of collective Defined Contribution schemes came next, with 25% and 21% of respondents respectively.

Jamie Jenkins, head of global savings policy at Standard Life, said: “Our latest poll of financial advisers confirms the industry is firmly on board with the roll out of Pension Dashboards, and wants the government to prioritise the timetable and design principles needed to get the project moving in 2020.

“The findings are encouraging as the Pension Bill reaches the House of Lords, hopefully putting to bed speculation the legislation would be delayed further.

“It’s unlikely we’ll see a comprehensive dashboard made available this year. However, the impact of the technology reaching development stage should not be understated. Pension Dashboards are going to give people greater control over their retirement savings and, ultimately, help the advice and wider savings and investment industry deliver universal pension coverage for all.”

• 232 UK advisers on the Standard Life database were surveyed in November and December.