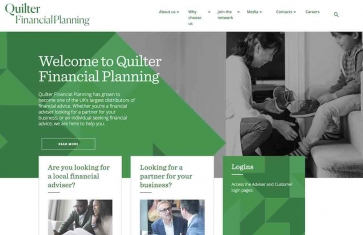 Wealth manager and Financial Planner Quilter has reported positive Q4 net flows and a 13% increase in assets under administration to £110.4bn as it readies for a major re-platforming shift.

The company said assets grew over the past year with the help of “positive market movements” although the loss of some investment managers caused some net fund outflows.

The company, currently being restructured and rebranded under the Quilter name, has revealed that the initial migration of group assets to its new platform will take place in February.

The re-platforming will see most group assets in its divisions brought under one roof for the first time.

The re-platforming process, called the Platform Transformation Programme by Quilter, will see the initial migration of assets onto the new UK platform planned for the weekend of 22/23 February.

On the negative side, the business experienced net outflows of £0.8 billion for the year, it said, “reflecting the impact of the previously announced departures of some investment managers.”

Paul Feeney, CEO of Quilter plc, said: “2019 was a good year for market performance but a challenging year for net client flows. We were pleased to finish the year in a positive position. Net inflows of £0.3 billion for the year represented a sharp turnaround from the net outflow of £0.2 billion for the nine months to end-September.

“Looking across our businesses, the integration of our advice acquisitions is progressing well and both Lighthouse and Charles Derby, which this week rebranded to Quilter Financial Advisers, are well positioned to contribute to net flows in 2020.

“Net flows into the UK platform remain subdued ahead of migrating advisers and customers onto our new platform this year. Our new UK platform will be transformational for Quilter.”

More in this category: « Advisers urge Pension Dashboard priority this year 1 in 4 over 55s fear never being financially independent »
back to top