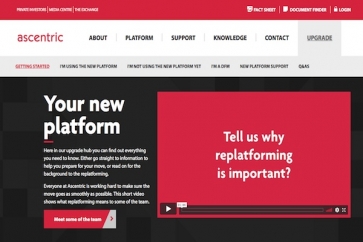 Mutual financial provider Royal London is considering the future of its platform Ascentric with a sell off possible.

An Ascentric spokesman said today: “As you would expect, we’re exploring a number of options to help inform our future strategy.”

Ascentric is based in Bath and is run by Rob Regan, head of Royal London Platform Services. He has been asked for further comment today.

The company has £15.9bn in assets under administration and a 2.3% of the platform market, according to Fundscape. It says 3,500 firms are using its platform via Ascentric and its IFDL white label brand.

The company was reluctant to comment further today on reports that it has appointed a City firm to help find a buyer.

The company re-platformed last year, moving to the Bravura system, a move that caused some planned non-availailability of services for several days.

At the time Mr O’Dwyer said: “Royal London has capitalised on some of the big trends in our market through a winning combination of great service to intermediaries and excellent value for customers and members. I hope to build on these cornerstones of success and ensure that Royal London uses its mutual status to deliver great service and value.”

A number of industry experts have predicted consolidation of the platform sector. This week private equity firm AnaCap acquired one of the smaller platforms, Wealthtime and Embark Group bought Zurich’s platform last year.

More in this category: « Financial Planner celebrates women becoming majority of staff FCA appoints interim director of strategy and competition »
back to top