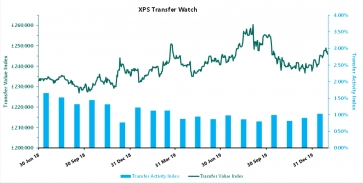 Defined benefit pension transfer values regained in January much of the ground they lost in the last quarter of 2019.

According to the monthly XPS Transfer Watch the number of members taking a transfer value also reached the highest level in almost a year.

XPS said the movement was driven by a 0.3% fall in gilt yields over the month, which was partially offset by a smaller fall in inflation expectations.

XPS Pensions Group’s Transfer Activity Index recorded another increase in the number of transfers completed in January, to an annual equivalent of 1.03% of eligible members, up from 0.91% in December 2019.

Helen Ross, head of member options at XPS, said: “The marked increase in transfer activity is likely due to the elimination of some of the political uncertainty plaguing the markets over the last year, which may have been putting members off making big financial decisions.

“We are regularly asked whether there is any evidence of a surge in DB transfers as members try to beat a possible ban on contingent charging this year, but this is not strongly suggested by the numbers of members transferring from XPS administered schemes, but this may well materialise.

“Both the FCA’s (DB transfer) podcast and the publication of the letter to IFA firms are interesting in terms of the strong wording used. The FCA states in the letter “We expect you to start from the assumption that a pension transfer is not likely to be suitable for your client” which mirrors TPR’s sentiment for DB trustees. I anticipate that we’ll see more of this positioning from the FCA going forward.”

More in this category: « FCA appoints interim director of strategy and competition Shock as Sunak replaces Javid as Chancellor »
back to top