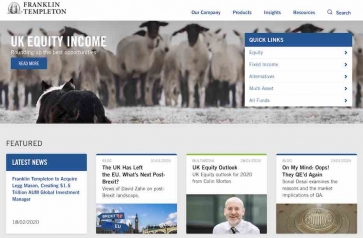 Fund manager Franklin Templeton is to acquire rival Legg Mason in a deal which will create a global business managing £1.15 trillion in assets.

Independent fund data provider and investment company Morningstar said it was placing both firms ‘under review’ following the deal to provide time to assess the value of the deal.

San Mateo-based Franklin said it had entered into a ‘definitive agreement’ to buy Legg Mason for $50 (£38) a share. The company will take on about £1.5bn of Legg Mason debt.

The deal values Legg Mason at just under £3.5bn.

Both Franklin Templeton and Legg Mason are US fund managers who operate extensively in the UK with Legg Mason also running the Martin Currie brand.

Franklin says the deal will help to expand its range of funds and presence in more territories around the world. There will be cost savings through 'synergies' of about £150m but Franklin said cost cutting was not a primary motive.

“We will also expand our multi-asset solutions, a key growth area for the firm amid increasing client demand for comprehensive, outcome-oriented investment solutions."

Joseph Sullivan, chairman and CEO of Legg Mason, said, “By preserving the autonomy of each investment organization, the combination of Legg Mason and Franklin Templeton will quickly leverage our collective strengths, while minimising the risk of disruption.”

Morningstar said the deal was something of a surprise as both firms had been acquirers of other fund managers. It is placing both firms under review “while we work things through our models.”

The company said: “The combined firm is expected to have $1.5 trillion (£1.15 trillion) in assets under management once the deal is completed, with a much heavier focus on fixed income (expected to account for 46% of managed assets) as opposed to equities (33%), with alternatives (7%), multiasset strategies (9%), and money market funds (5%) accounting for the remainder.

“While Franklin looks to be willing to retain Legg Mason's affiliate structure, which has proved problematic in the past, we think the strength of the deal resides in Western Asset Management, which accounted for 57% of Legg Mason's $792 billion (£609bn) in AUM at the end of December 2019.

More in this category: « Two new firms join CISI's Accredited elite Surprise jump in CPI inflation from 1.3% to 1.8% »
back to top