Record 77% of employees in auto-enrolment pensions 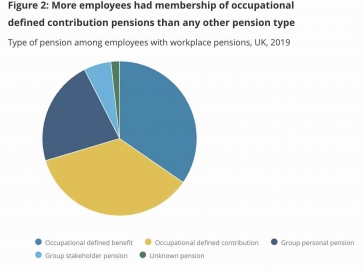 A record 77% of UK employees were in a workplace pension in 2019, according to latest ONS figures released today.

This compares to only 47% in 2012 when auto-enrolment began and is the highest membership rate for workplace pensions since 1997.

ONS says participation in occupational defined contribution (DC) pensions has grown in recent years to the extent that more employees have a DC pension than other type.

The youngest employees, those aged 22 to 29 years, have seen the most growth in workplace pension membership since 2012, rising from 31% of younger workers enrolled to 80% in 2019.

ONS says that in 2019, the gender gap in public sector pension membership disappeared. In the private sector a gap still persists with more men (77%) having a workplace pension than women (69%).

In 2019, some 78% of employees with DC pensions contributed at least 3% of earnings, up from 37% in 2018. ONS says this is likely mainly due to minimum auto-enrolment contributions rising.

Eleanor Levy, director of Marketing and Communications at NOW: Pensions, said: “It’s fantastic to see that 77% of UK employees are members of a workplace pension scheme, and auto enrolment is at its highest membership rate ever. However, more still needs to be done to ensure that everyone has the ability to save for a successful retirement.

“While DWP’s pledge to lower the auto enrolment age to 18 is a great start, we must ensure that we maintain this momentum and scrap the £10,000 auto enrolment eligibility criteria which is penalising those who simply don’t earn enough. This criteria disproportionately affects women who work part-time while they care for the younger and older generations.

“We are very supportive of Baroness Jeannie Drake’s family carer top-up, which will help approximately three million women, in addition to 300,000 men, to top up their pension savings whilst taking time out of work to be carers.”

More in this category: « Life expectancy rises after years in doldrums 85 out of 100 advisers recommend the profession »
back to top