Register for Financial Planning Today website for FREE to view more stories and get our daily newsletters. Click on 2 stories to see Registration pop up.
Wednesday, 18 March 2020 08:25 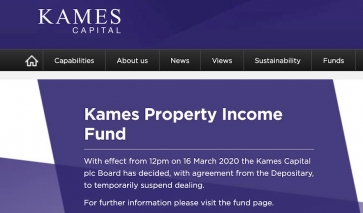 Kames Property was the first to suspend yesterday due to recent market turmoil and was followed soon after by the Janus Henderson UK Property fund.

The M&G Property Portfolio was suspended late last year. The three funds that have suspended so far hold assets of £4.9bn.

Experts have predicted that other property funds will likely follow suit.

Ryan Hughes, head of active portfolios at AJ Bell, said: “The suspension of the Kames Property Income fund has been swiftly followed by the Janus Henderson UK Property fund also suspending on the basis of material uncertainty over the valuation of UK commercial property.

“With independent valuers finding it impossible to accurately value property given the major economic uncertainty, there is little choice but to suspend dealing.”

He said new rules for property funds introduced by the FCA in 2019 have made it more likely that suspension will occur where there is “material uncertainty” over pricing of at least 20% of the assets.

He said: “In the current turbulent market conditions the fund’s Standing Independent Valuer, CBRE, has advised that they are unable to accurately value the properties within our funds. Under these circumstances, and in accordance with COLL rules, we believe it is in the best interests of our investors to suspended dealing within our funds.”

In a statement today the FCA said: "The FCA understands that certain Standing Independent Valuers have determined that there is currently material uncertainty over the value of commercial real estate (CRE).

"In such situations, a fair and reasonable valuation of CRE funds cannot be established. As a result, some managers of open-ended CRE funds have temporarily suspended dealing in units of these funds and others are likely to follow for the same reason.

"Suspensions can be used by managers of open-ended funds, in line with their obligations under applicable regulations. In these circumstances, suspension is likely to be in the best interests of fund investors."

• Editor's Note: this story has been updated to add additional fund suspensions and the FCA statement.

More in this category: « PFS and CII cancel multiple events and exams Profits up at Curtis Banks but uncertainty ahead »
back to top