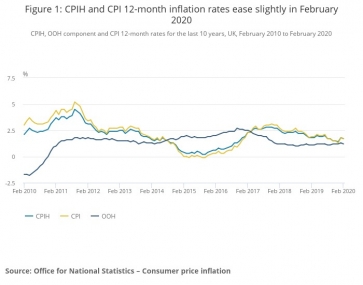 The information was released this morning a few hours earlier than normal due to the Coronavirus outbreak.

ONS, which releases the information, said that starting today it will publish price sensitive information at 7 am rather than 9.30 am. Today’s figures were collated before

the outbreak took hold in a major way.

The Consumer Prices Index including owner occupiers’ housing costs (CPIH) 12-month inflation rate was the same at 1.7% in February, down from 1.8% in January 2020.

Price rises for recording media and for restaurant and hotel services produced the largest upward momentum.

ONS head of Inflation Mike Hardie said: “There was a slight slowing in the rate of inflation due mainly to falling prices for motor fuels and computer games.”

More in this category: « Update: Easier access to Coronavirus updates Transact asks for patience as staff shift to home working »
back to top