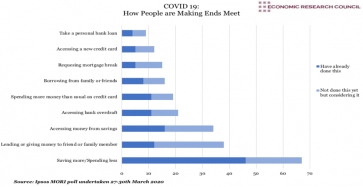 People are saving more and spending less as the impact of the Coronavirus outbreak hits personal finances, according to analysis by the Economic Research Council.

The survey found that 46% of people were saving more and spending less and nearly 70% overall were considering this strategy, one of the highest responses.

The economic thinktank says that a recent large scale savings study by Ipsos-MORI highlighted “the relatively swift and destructive impact of Covid-19 on personal finances.”

The found that almost half (46%) of all Britons were tightening their belts as a result of Covid-19.

The ERC says the “inter-generational differences” in the effect of the pandemic are becoming clearer.

For example, young people appear to be the most generous when it comes to being willing to lend to family and friends.

The ERC says it is interesting that the young appear most affected and yet most likely to offer financial assistance to others.

This may be a product of a portion of the cohort having professional jobs and fewer dependents, versus another portion who may be in precarious employment, it says.

Overall about 7% of people have borrowed money from family or friends and 15% are considering doing this.

The chart displays the results of a survey conducted by Ipsos-MORI of 1,072 representative British adults conducted online between 27 March  and 30 March.

The survey question was: ‘Thinking about your current financial situation, have you done, or are you considering doing, any of the following?’ with certain questions having a ‘not applicable’ option.

More in this category: « International gang may have hacked CISI website FCA says no ban on e-signatures »
back to top