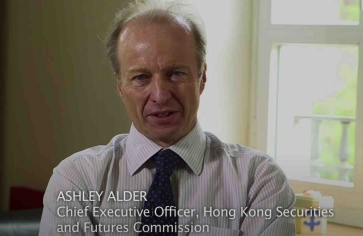 Experienced financial regulator Ashley Alder, head of Hong Kong’s Securities and Futures Commission, could be the next chief executive of the FCA, according to reports from Sky News.

The channel says Mr Alder is one of a number of contenders who could become the next chief executive of the regulator following the departure of former chief executive Andrew Bailey to become Governor of the Bank of England.

Sky News reported at the weekend that Mr Alder is due to step down later this year after nearly 10 years running the Hong Kong financial regulator and is a potential replacement for Mr Bailey.

Mr Bailey was appointed as the new Bank of England governor in December. Since he left the FCA for the bank in March, long term FCA executive Christopher Woolard has been interim chief executive.

According to Sky News, City bankers believe Mr Alder is among a small number of external candidates to replace Mr Bailey. It is not yet known when the Treasury will announce Mr Bailey’s permanent replacement.

Mr Alder has been chief executive of the Securities and Futures Commission in Hong Kong since October 2011 and is due to end his appointment period in September. He is also chairman of the influential International Organization of Securities Commissions (IOSCO) and sits on the Financial Stability Board's Plenary and its Steering Committee.

Internal contenders are believed to include Mr Woolard, who was appointed by the Treasury to be interim chief executive on advice from the FCA board.

Prior to becoming interim CEO Mr Woolard was the FCA’s executive director of strategy and competition and a member of the FCA’s board. He joined the Financial Services Authority (the FCA’s predecessor) in 2013 and helped lead the creation of the FCA. Before that, he worked at Ofcom (2009-2012), the BBC (2005-2009) and in the Civil Service (1995-2005).

At the time Mr Woolard was appointed interim CEO in January, FCA chairman Charles Randell said: “I’m looking forward to working with Chris in his interim chief executive role. I’m confident that he and executive committee colleagues will continue to deliver our ambitious plans for change in 2020 and beyond, building on the foundations laid by Andrew Bailey.”