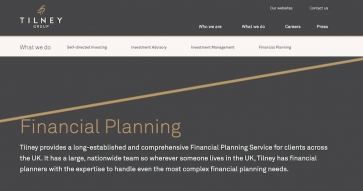 Private equity firm Warburg Pincus has stepped in to get the £45bn tie up between wealth managers Tilney and Smith & Williamson back on track.

The firms announced today they have agreed to a revised structure for their proposed merger which was in danger of collapsing.

Sky News reported over the weekend that New York-based Warburg Pincus was pumping in £250m to revive the deal which would now be structured more as a Tilney takeover of Smith & Williamson.

Tilney and Smith & Williamson confirmed the merger was back on track this morning. The merger between the two wealth management firms was first announced in September last year but little has been heard in recent months.

The merged firm will be responsible for £45bn of client assets, of which 80% will be discretionary mandates or funds. It will have approximately 280 investment managers, 260 Financial Planners and a professional services business with 150 partners and directors.

The merged group will be known as Tilney Smith & Williamson and will be one of the the UK’s largest wealth managers.

As part of the revised deal Warburg Pincus will co-invest in the combined business alongside funds from Permira. The move means less reliance on external debt, lower financing costs and an improved regulatory capital position, say the firms.

Tilney and Smith & Williamson say despite the impact of the Coronavirus outbreak they have seen high levels of client engagement and net flows have increased in the first half of 2020 compared to the same period in 2019 at both businesses.

The merger is now expected to take place in the second half of 2020 subject to regulatory and shareholder approval.

The merged business will look after about £45bn in assets under management and generate about £530m revenue. It is expected to be fourth largest UK wealth management business.

David Cobb and Kevin Stopps, joint chief executives of Smith & Williamson, said: “The rationale for merging Smith & Williamson with Tilney has been persuasive from the outset, given the complementary strengths of the two businesses and the benefits of scale the combination will bring. The revised structure retains both these strategic benefits, as well as value for our shareholders, and delivers a more robust financial structure and a strong additional partner for the future in Warburg Pincus.”

Chris Woodhouse, chief executive of Tilney, said: “Together, Tilney Smith & Williamson will be uniquely well placed to support clients with both their personal financial affairs and business interests. The compelling rationale has been further validated by Warburg Pincus making a significant investment in the business against the backdrop of a major global health crisis and related challenges in the economic environment.”