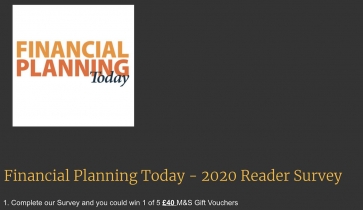 A recent Personal Finance Society Twitter poll found that about 7% of the Personal Financial Society’s members - equivalent to about 2,800 individuals - were furloughed by the end of April.

Some firms, such as Succession Wealth, have confirmed they have furloughed staff but others, such as Schroders Personal Wealth and Hargreaves Lansdown, have said no staff have been furloughed.

The Financial Planning Today survey question asks: “Have you furloughed any staff (or seen any colleagues furloughed) since the lockdown began?”

The survey, due to end this week, is still under way and is open to Financial Planners, Paraplanners, Wealth Managers and IFAs. You can take part here.

Despite the use of furlough schemes, the initial survey results suggest most planners remain confident about the future. Full details of the survey will be published in the next issue of Financial Planning Today magazine out in July.

While figures for furlough use appear relatively significant for Financial Planning firms they are well below the 70% usage of furlough schemes across UK firms overall.

A recent survey by pay and conditions research firm Emolument found that as many as 44% of all staff earning less than £25,000 per annum have been furloughed compared to only 7% of those earning between £50,000 and £100,000.

Emolument also found that furlough levels in different sectors varied widely with 50% of staff working in tourism and restaurants furloughed compared to only 2% in financial services, one of the lowest sector levels seen.