Changes at the top for Frenkel Topping 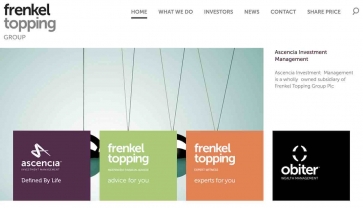 Paul Richardson has stepped down as chairman of Financial Planner Frenkel Topping and handed the role to Tim Linacre.

Mr Linacre has over three decades of experience as a stockbroker and an investment banker. He joined the board of Frenkel Topping in June 2018.

He is currently a non-executive director of energy company SDX Energy Plc and chief executive officer of Instinctif Partners, a business communications firm.

Mr Linacre was formerly chief executive at Panmure Gordon, where he worked for more than two decades. Prior to Panmure Gordon, he was at Hoare Govett and Deloitte Haskins and Sells where he qualified as a chartered accountant.

Mr Linacre said: “I am pleased to take up the role of chairman. My appointment comes at an exciting time for the business, with our investment strategy and customer centric ethos having delivered a strong start to the year. I would like to thank Paul for his contribution and dedication to Frenkel Topping, and we wish him all the very best for the future."

Richard Fraser, chief executive officer, said: "Paul joined the business at a time of change, and his contribution has helped oversee a successful period of progress and growth.

"I would like to thank him for his support and wish him well for the future. The board is delighted that Tim has accepted the role of non-executive chairman, he already has a deep understanding of the business from his previous board role. I look forward to working with him as we continue to grow Frenkel Topping and build on the momentum achieved to date."

More in this category: « TPR unveils interim rules for DB 'superfunds' Half of over-55s fail to 'get' the Pension Freedoms »
back to top