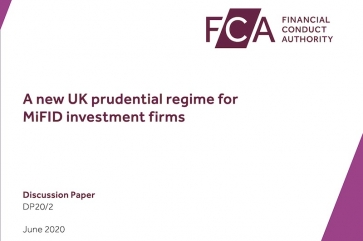 Chancellor Rishi Sunak made clear earlier this year that the EU’s planned new Investment Firm Directive (IFD) and Investment Firm Regulation (IFR) would not be implmemented by the UK.

The EU will implement the new rules from 26 June 2021 but the UK will instead implement its own domestic rules.

The FCA says it believes a “large majority” of UK investment firms would welcome a domestic regime.

The DP says that the FCA is “broadly…very supportive” of the new EU regime but plans to introduce its own regime “intended to achieve the same overall outcome.”

The FCA says: “This marks the first step in introducing a set of prudential rules for investment firms to better reflect their business models and the risk of harm they pose to consumers and market.”

The FCA says a new domestic regime for firms could mean:

• Lower regulatory costs due to much more proportionate

Christopher Woolard, Interim chief executive of the FCA, said: "We have long advocated for a bespoke prudential regime for investment firms.

“A new UK regime would represent a significant improvement in the prudential regulation of investment firms. For the first time, it would deliver a regime that has been designed with investment firms in mind.”

Investment firms and other interested stakeholders will have until 25 September to respond.