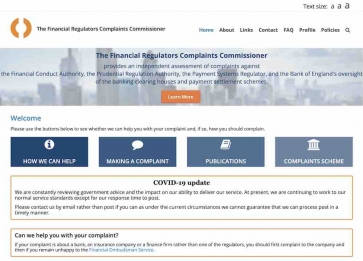 The FCA, PRA and Bank of England are consulting on an updated Complaints Scheme to make it simpler and more "user friendly."

The system allows people who believe they have been treated unfairly by any of the three regulators to make a complaint to a single Complaints Commissioner.

The move is a joint consultation with the Bank of England, the Prudential Regulation Authority (PRA) the Financial Conduct Authority (FCA) as the scheme covers all three regulators.

The consultation is called: CP20/11: Complaints against the Regulators (The Financial Conduct Authority, the Prudential Regulation Authority and the Bank of England).

The regulators are consulting because they want to simplify the wording of the scheme and make it more accessible to its main users – consumers and small businesses – as well as others.

The regulators are also proposing a more detailed description of their approach to ex-gratia compensatory payments such as goodwill payments. They believe this will help complainants understand what they “can and cannot” expect from the scheme.

This consultation is relevant to regulated business and consumers of financial services. It may also interest consumer advocates and action groups, trade associations and politicians, say the regulators.

The scheme also describes the role of the independent Complaints Commissioner.

Responses to the consultation are required by Monday 14 September.