Nearly half of advisers may quit DB transfers 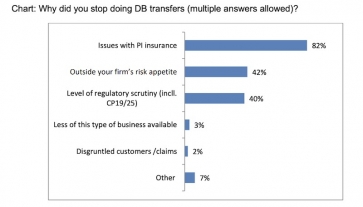 Nearly half of financial advisers who currently offer pension transfers may quit the market in the next 12 months, new research has warned.

Of those advisers who have already given up doing DB transfers, 75% blamed the cost of Professional Indemnity insurance as a key reason.

Royal London and consultants LCP carried out extensive research of more than 500 advisers who have arranged DB transfers in the past year.

They found “major problems” in the supply of advice for members of Defined Benefit pension schemes who are considering transferring out.

Their paper found that the supply of high-quality, impartial advice could be “increasingly under threat” from regulatory and market developments. The paper calls for more support for advisers, including action to reform PI insurance.  It is also encourages more schemes to offer ‘partial’ DB transfers as an alternative to the ‘all-or-nothing’ transfer option.

Key findings of the research include:

• Of those who had already given up advising on DB transfers, three quarters cited PI costs as a key issue

Advisers also felt that the FCA’s position on DB transfers was uncertain and some feared that a wholesale review of past cases was coming. Many respondents said that giving DB transfer advice was now outside the ‘risk appetite’ of their firm.

One response to the challenges has been for schemes to appoint one or more advice firms to offer advice to members.

Justin Corliss, senior pensions development and technical manager at Royal London, said: “Unfortunately, the costs of obtaining PI cover and constant regulatory change have led many advisers to leave the market or to consider doing so.  Urgent action is needed to make sure that all members can access the expert advice that they need.”

Steve Webb, partner at LCP, said: “Growing numbers of schemes have chosen to appoint one or more advice firms to support members as well as subsidising the costs of advice.  Members benefit from the reassurance that the scheme has undertaken due diligence on the advice firms involved as well as from reduced advice costs where the scheme is making a contribution.”