Eat Out scheme cuts inflation in August to 0.2% 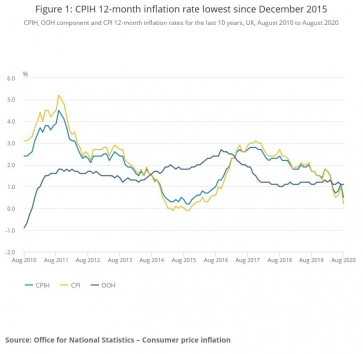 The Consumer Prices Index (CPI) measure of inflation fell sharply from 1% in July to 0.2% in August as the Eat Out to Help Out restaurant scheme kicked in and helped lower eating out prices.

The falls comes after CPI inflation rose sharply from 0.8% in June to 1% in July.

Some commentators had expected inflation in August to be near zero.

The latest figures suggest the rate of inflation is low but volatile.

CPIH inflation is the lowest since 2015.

The biggest contributor to the CPIH 12-month inflation rate in August 2020 came from recreation and culture (0.35 percentage points).

The biggest upward drivers of inflation during the month were games, toys and hobbies, accommodation services, road transport services and second-hand cars.

The number of CPIH items unavailable to UK consumers in August has reduced to eight as the pandemic lessened its impact on the availability of items in shops. •

Neil Birrell, chief investment officer at Premier Miton, said: “The inflation data in the UK surprised on the upside. The core year-on-year CPI was up 0.9% against expectations of 0.5%. Rising inflation has been much discussed as the inevitable consequence of all the stimulus being injected into the economy.

“Policy makers won’t be worried about this number, they are more likely to be pleased there is activity in the economy.”

Derrick Dunne, chief executive of Beaufort Investment, said: “The UK is now at risk of near-term negative inflation, albeit likely temporarily, after a very sharp drop in inflation in August which left CPI at just 0.2%.

"We live in extraordinary times and this is being manifested most clearly in economic data, with the inflation figure revealing the impact of government intervention. Most notably, the government's Eat Out to Help Out scheme was the decisive factor, accounting for 0.44 percentage points of the decline from July's reading, which was at 1%.

"The official CPIH figure showed the same impact, with inflation falling to 0.5%, from 1.1% the previous month, as numerous sectors showed a slump in activity.

"Investors now face a quandary; how long can they discount the impact of inflation which, left unchecked, can be one of the biggest detriments to long-term wealth creation? They certainly seem to have some breathing room in the near-term, although it is unlikely a deflationary spiral would be allowed to take hold, especially given the unprecedented stimulus that has been thrown at the crisis."