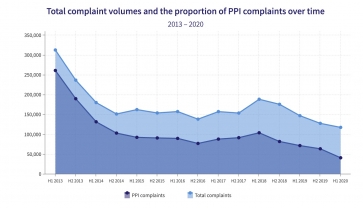 The number of complaints dealt with by the Financial Ombudsman Scheme has fallen to its lowest level for at least 7 years.

It’s caseload has fallen by nearly two thirds since 2013.

The number of PPI claims is falling rapidly following the cut-off date for submitting complaints of August last year. Even so PPI continues to be the most complained about product.

Complaints about PPI and general complaints are continuing to trend downwards over the long term but the FOS said there was a small rise in non-PPI complaints in the first half compared to the previous half year.

The peak for PPI complaints was in the first half of 2013 when it received 261,503 new complaints.

There were 105,721 new cases received in the first half with banking and credit and PPI seeing the lion’s share of complaints. The total includes 1,797 complaints about investment and 1,566 about decumulation and pensions.

In decumulation and pensions Aviva Life and Pensions had the highest number of complaints at 276, followed by Prudential with 195, Phoenix Life with 155,  Royal London 95, Scottish Widows 80, Zurich Assurance 72, Lloyds Bank 45. Hargreaves Lansdown and St James’s Place both had 30.

On investment complaints, Barclays saw the highest number at 223 with Lloyds Bank hit with 187 and Santander 183. Hargreaves Lansdown had 95 and St James’s Place 40.

Overall the FOS upheld 31%. Excluding PPI, the uphold rate was 42%.

The uphold rate for banking and credit complaints was 49% for the first half of 2020, the highest of any sector but a decrease on 2019 figures.