CPI inflation rate bubbles up to 0.5% 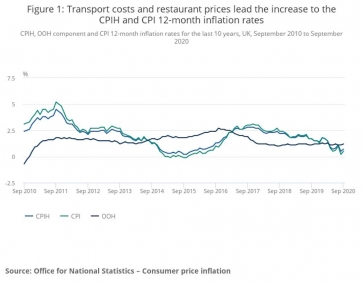 The end of the Eat Out to Help Out scheme - which ran in August - caused a spike in inflation in September as eating out costs rose.

The Consumer Prices Index (CPI), including owner occupiers’ housing costs (CPIH), 12-month inflation rate was 0.7% in September, up from 0.5% in August.

The main contributor to the rise in CPIH was rising recreation and culture costs.

ONS said the end of the Eat Out to Help Out scheme - which offered government-subsidised eating out discounts - along with higher transport, were significant factors in higher inflation which remains at historic lows despite the increase.

There was a smaller downward contribution to inflation from furniture, household equipment and maintenance, games, toys and hobbies and food and non-alcoholic beverages.

ONS, which provides the figures, said the number of CPIH items unavailable to UK consumers in September remained at eight.

Robert Alster, CIO at investment management firm Close Brothers Asset Management, said: “Inflation has seen an uptick following August’s five year low, as the Eat Out to Help Out scheme wound down. But September’s figures are still well below the Bank of England’s 2% target.

As the UK starts to experience a second wave, the employment outlook is weak and wage growth limited. Inflationary pressures are few and far between. While the Bank of England has made it clear that negative interest rates remain a part of its monetary toolkit, we’re not likely to see such measures called upon this year. The focus is still very much on ensuring that fiscal measures are given every opportunity to gain traction. But as the current crisis forces the Treasury to step up again and again, the Bank of England may feel growing pressure to take action.”

Jon Cunliffe, chief investment officer at wealth manager Charles Stanley, said: “Some easing in the weakness in transport services and the end of Eat Out to Help Out caused a modest bounce in inflation for September, with headline and core CPI rising to 0.5% and 1.3% on a year on year basis. This modest increase reflects the fact that many eating out discounts remained in place during September.

“Whilst there will be some supply bottlenecks we expect inflationary pressure to remain modest over the months ahead and, with the economic recovery faltering in the wake of further Covid-related restrictions to free movement, we expect further QE from the Bank of England at next month’s Monetary Policy Committee meeting and during 2021.”

More in this category: « £20.5m investment scammer is jailed after 6 year probe Pensions LTA set to rise to £1.078m next year »
back to top