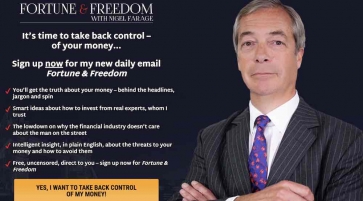 One of the daily finance-oriented newsletters from the Brexit Party leader this week asked readers to “tell us about your successes by going it alone – leaving the money men and middlemen by the side of the road.”

Nigel Green, chief executive and founder of the deVere Group said: “Successful DIY investing can be possible, but for most people it is not recommended – indeed, it could be a costly and traumatic accident waiting to happen.

“Going it alone can be monumentally risky for inexperienced investors as the complexities involved can sink their portfolios.

“Perhaps this is why around two-thirds of wealthy individuals have a professional financial adviser of some sort, according to new independent research from the University of Toronto.

“I would urge anyone who extols the virtues of a DIY approach to investing to also underscore the risks and potential pitfalls to be avoided.”

The deVere founder said a DIY investing approach could be “monumentally risky” and extolled the virtues of independent advice.

He said: “While investing remains almost universally regarded as one of the best ways to create, grow and safeguard wealth, considering the pitfalls of getting it wrong, it could be an expensive mistake for you and your family not to seek professional advice.”