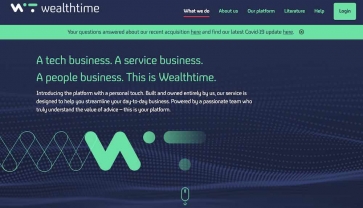 Up and coming adviser platform Wealthtime says it will consider its own acquisitions following the completion of its takeover by European private equity firm AnaCap Financial Partners.

AnaCap finalised its takeover of Wealthtime, announced in February, this week following approval by the FCA.

Wealthtime, one of the smaller platforms, has marked the completion of the deal with a brand relaunch and plans to expand.

The business, which currently has £2.2 billion in Assets Under Advice, said it would “consider possible acquisitions when strategically beneficial.”

As part of the deal Wealthtime, founded in 2006, has seen a number of new executives join its senior team and two founders have moved to short term consultancy roles.

Former Alliance Trust Savings CEO Patrick Mill, due to be incoming CEO, is currently working with AnaCap on the wider project, the firm says, and will be joining Wealthtime "in due course." Richard Denning, announced as COO designate earlier in the year, will not now be joining the business, the firm says.

Dominic Easton, incoming FD, joins Wealthtime commercial director Lucy Bristow, to help form the senior executive team. Steve Payne, who built the proprietary technology, and Damian Baker, who heads the customer service proposition, are remaining with the business and will be part of the senior team.

Jan Regnart, founder and chief executive and former James Hay CEO, and Colin McCarthy, compliance director, have moved into consultancy roles to help with a handover due to be completed by early next year.

In other appointments, Lucy Bristow, an established member of the Wealthtime team, joins CFO Dominic Easton on the board as commercial director.  In addition, Damian Baker and Steve Payne will retain their responsibilities as head of client services and head of IT & operations respectively.

The firm is recruiting for a head of risk and compliance and will also look to appoint a CTO to drive platform technology and develop fintech capabilities.

The platform says the private equity takeover will spur the development of Wealthtime’s proprietary platform technology.

New investment will help it improve user experience, upgrade functionality and allow more advisers to use it, it says.

Wealthtime has done well in recent surveys by industry consultants and been named a ’rapid riser’ by one.

The cost of the takeover of Wealthtime has not been released.

The acquisition of Wealthtime is AnaCap’s first investment in the UK platform sector. At the time the deal was announced, Nassim Cherchali, managing director at AnaCap, said: “The acquisition of Wealthtime represents AnaCap’s first step into the UK wealth management space, with their highly impressive proprietary technology platform being a significant catalyst for the pursuit of this deal.”

More in this category: « Paradigm Norton wins Chartered Firm of Year in PFS Awards FCA’s Rathi warns no quick fix for levy crisis »
back to top