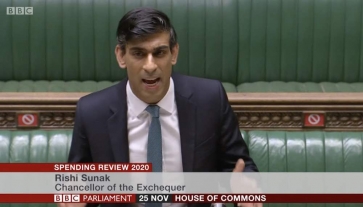 Chancellor Rishi Sunak has frozen public sector pay for most workers amid a raft of grim predictions for the UK economy he outlined to MPs today in the House of Commons.

In his Spending Review, the Chancellor said that GDP this year would decline by 11.3% - the biggest annual drop in 300 years.

He also forecast the economic impact of the Coronavirus pandemic would still be felt until at least 2025.

Among his other forecasts were:

• The UK economy will still be 3% smaller in 2025 than was expected in the March Budget.

Mr Sunak said despite the grim backdrop the government had spent hugely on protecting the economy from the impact of Coronavirus and had saved jobs but he admitted he could not save all jobs.

On the public sector he said there would be a general pay freeze but 2.1m public sector workers earning earn less than £24,000 per annum would get a pay rise of at least £250 and some doctors and nurses would also get rises.

Among other announcements he made were:

While Mr Sunak detailed his spending plans he made no mention of tax changes as this will be dealt with in his next Budget.

Reaction to the statement focuses on the huge level of borrowing, the negative economic forecasts and the lack of detail how the spending will be paid for.

Neil Birrell, chief investment officer at Premier Miton Investors, said: “The Chancellor spelt out quite clearly the extreme damage that has been done to the economy; the numbers are frightening.

“After the forecast bounce next year and in 2022, growth will fall back again just over 2%, then back below 2% for the next two years. This illustrates that the scars are long lasting; the scale of debt and unemployment are fundamental to the problem. The support for jobs and business are significant and need to be, the spending on infrastructure is also positive, but that takes time to plan and apply; spending is needed now.”

Rachael Griffin, tax and Financial Planning expert at Quilter, said the Chancellor’s Spending Review would be his final “happy hour” before tax rises next year.

She said: “The OBR’s forecast makes it clear that this will be the Chancellor’s final happy hour and the Treasury will now seek to raid the piggy bank to pay for the historic borrowing over this Parliament.

“While we now know just how big the fiscal hole is likely to be, we are still in the dark as to how the Chancellor plans to fill it as there were no decisions on tax policy today. This will have to wait until next year and the government will now consider their options carefully.

She believes the Chancellor will try hard to avoid raising raise income tax, VAT or national insurance and the pensions triple lock should remain but other taxes, such as CGT and IHT, could rise. Tax reliefs could also be under threat although pensions tax relief could be kept intact, she said.

More in this category: « 58% of advisers struggling to add new clients Chancellor to axe RPI - but not until 2030 »
back to top